We’re excited to announce the launch of our second international Free Walking Tour in Buenos Aires, Argentina, in partnership with Context Travel!

In this free, digital walking tour you will steep yourself in the political intrigue and power struggles of Argentina, from the colonialism of the Spanish, to the revolution of 1810, to the Dirty War in the the 70’s when 30,000 young Argentinians went missing. The events that shaped Argentina and it’s people all start right here in Plaza de Mayo, the perfect place to uncover this turbulent history before setting out to explore the rest of the city! You will be guided by local Buenos Aires storyteller, Context Travel Guide, and architect, Juan Pablo, who has lived here for over 30 years.

The walking tour is hosted on the free, Story City App, which uses GPS to guide you through Plaza de Mayo’s most historic sites. Even if, as an international traveller, you don’t have mobile data in Argentina, you can pre-download this tour via Wi-Fi to your mobile device and do the tour offline! Which means the tour is available 24/7 so you can do the tour when it suits you! You can download the app on your iOs or Android device here.

We partner with local people and businesses, like our guide for this tour, Juan from Context Travel, so you get the best local information, history, and intrigue! The tour includes both audio and text as well as visuals of some of Buenos Aires most politically charged sites.

Check out the video below to see how Story City works! The free walking tour of Buenos is only Story City’s second history tour, so while the video below talks about our fictional Australian choose your adventures, don’t worry, the tour of Plaza de Mayo is full of facts, local history, and political drama and tragedy.

The tour should take you between 30 to 40 mins and will visit five unmissable locations in Plaza de Mayo, Buenos Aires, including:

Get started and download the app today! Check out the sneak preview at the bottom of the post to get a taste of what awaits you on the Buenos Aires free walking tour.

This tour starts in front of the Buenos Aires City Hall on Plaza de Mayo. The tour was created in partnership with Juan Pablo and Context Travel.

Systems of Power in Latin America

A warm welcome to our Buenos Aires mini tour in partnership with Context Travel. We’re so glad you could join us for this whirlwind tour on political power struggles in this fabulous country. Argentina has been a political melting pot for centuries, and this mini tour will give you a great introduction to the history that you can take with you as you explore the city.

Just quickly, this mini-tour couldn’t have been possible without the generous partnership of Context Travel – who create smart, cultural and historical tours for travellers across the world. Most of the guides for Context hold PhDs in their field, teach at a university level, and provide amazing conversational tour experiences for intimate groups of six or under, so all your questions are answered. If you are looking for an intimate exploration of the rest of this city, I highly recommend you check out their other tours at the end of this digital experience.

In this tour you’ll be guided by myself, Emily Craven, CEO of Story City and Context Travel guide, Juan Pablo, who ran the in-depth architecture tour we joined here. Juan was born and raised in Buenos Aires and studied architecture at the Universidad de Buenos Aires during the social and economic crisis of 2001. He teaches at that same university today and is a consultant to the federal government on cultural and historic heritage with a specialisation in symbolic and cultural values of Buenos Aires architecture and urban spaces. The amount of knowledge in his head is breathtaking and we’re so lucky he ended up as our Context Travel guide.

Before we get started, a brief apology for the road noise in some of these recordings, as you can tell standing in the middle of the chaos, it’s a hard place to record! So, any time the interference gets a bit much you’ll find me taking over parts of the story Juan is telling so you get all the information without the technical trouble.

Right now, you’re standing in Plaza de Mayo – the main foundational site of Buenos Aires whose origins can be traced back to Juan de Garay’s foundation of the city back in 1580. As well as the city centre Plaza de Mayo has been the scenes of the most momentous power struggles in Argentine history, as well as the location of the largest public demonstrations up to this day as you can see by the Riot shields scattered about the area, ready for use at a moment’s notice. There are a couple of historic photographs of the Plaza through the ages on the app if you’re interested. The building across the road facing away from the Plaza is the Buenos Aires City Hall, where the Mayor of Buenos Aires has been housed since the 1880’s. And the clock tower behind hall and to the left is the domestic parliaments, the City Legislature.

Both these buildings are reminiscent of the recent history of the country, but to fully grasp the power struggles of this country, we’d like to take you back to when the Spanish first arrived and set in place the systems of power in Latin America.

“The Spanish inherited the way the Aztecs and the Incas organized.”

There are three economic systems that the Spanish used. For example, the one that they brought was called the encomienda…

“Which was bringing a nobleman from Spain and letting him manage a whole huge piece of land.”

The nobleman was supposed to protect the people in exchange for part of what they produced. This was a practise from the middle age but has had repercussions through Argentine history. That’s the reason why many Argentines still have this middle age way of thinking, says Juan, where poor people still respect the rich people a lot.

“We inherit this… people don’t question anything.”

Then the two other systems come from the Inca empire. One is called San Aquanasco that is a kind of slavery, and the other one is a system that rotates workers according to the season. It was like slavery too, but they used indigenous people, for example, in certain seasons for the harvest of corn, and then in the next season they moved them to the coast for fishing, and then they moved them to the mines etc. All that was used by the Incas and adopted by the Spanish.

As you see, the capitals of those empires, the Inca empire, and the Aztec empire were replaced by Spanish cities. According to Juan, this is because the Spanish were clever enough to see that the cities were so well-organized that they didn’t need to change everything. One of the main ways the Spanish took over cities was by destroyed the native temples, which they could see were sacred places, and putting a Baroque Catholic Church on the foundations. The base of the church in most major Latino Colonial cities is an Aztec temple or Inca Temple.

This decimation of their cities set up a hate for Spanish rule which centuries later turned into a denial of Argentina’s Spanish origins, and the tearing down of all Spanish related architecture and reminders of their oppression – something Juan talks about a lot in the amazing 3 hour architecture tour he gives through the streets of Buenos Aires for Context Travel. This hatred for the Spanish is one of the reasons why Buenos Aires is such an eclectic mix of architectural styles. But back to our political power struggles. Have you ever wondered why the country boarders in South America are divided the way they are?

“An interesting question would be why the Portuguese colony is one country, that is huge, and the Spanish colonies like 15 countries.”

It’s not a coincidence that the revolution from Mexico to Argentina all took place around the same years, in the 1810s. Apart from the influence of the idea of American independence, and the French Revolution, a very important part is that in the very early 19th century Napoleon invaded Spain. So, he replaced the king and sent the Spanish king to prison.

This was an amazing opportunity for the different regions of the Americas to revolt, as Spain was very busy fighting with France. The difference with Brazil is that the Portuguese King had enough time to see what was happening in Spain, and he said, “Now Napoleon is coming to Portugal.” He had time to escape, and he settled in Rio.

“Brazil was a monarchy for 80 years. Was the empire of Brazil and they had a King.”

By being a monarchy, it was kept together under a very authoritarian regime. And that’s also the cause of why slavery lasted for 70 more years in Brazil than in Argentina.

This is a great point in the story to move to our second location of the Tour, the place where the Argentinian revolution of 1810 started, the Buenos Aires Cabildo. 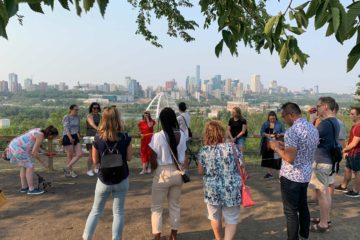 Open for Story Pitches in Edmonton!

Story City is excited to open up pitch submissions for stories from writers in Edmonton (or who know Edmonton well!) this Spring. If you’re from another location in Canada, please skip to the bottom of Read more… 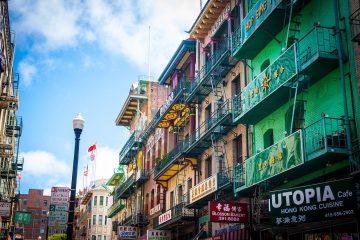 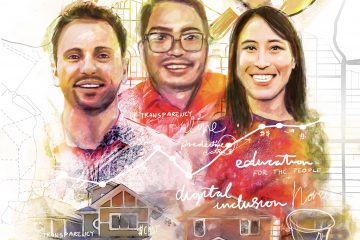